The Man They Could Not Hang


The case of John "Babbacome" Lee

The case of John "Babbacome" Lee, the so-called Man They Couldn't Hang, continues to retain its fascination among history buffs. Was the case of the man who survived three attempted hangings a case of divine intervention, or just extreme luck?

Emma Whitehead Keyes was an elderly spinster who lived alone at her home in The Glen, with only her servants for company as well as Lee, her half-brother. On November 14, 1884, she was found brutally murdered in the early hours of the morning. She had three head wounds and her throat was slashed. The murderer had also attempted to conceal evidence of his crime by trying to burn the body.

Suspicion fell on John Lee, who was the only man present in The Glen at the time of the crime. In addition, he was found with a cut on his arm that he could not explain how he got. He also had a previous criminal record. These circumstances were enough for him to be tried for the murder of his employer.

In the absence of other suspects, John Lee was convicted of the crime and sentenced to hang on 23 February 1885 at Exeter Prison. Despite his conviction, Lee continued to insist that he was innocent.

On the date of his execution, the executioner James Barry tested the scaffold several times to ensure that the trap would open. The tests were successful as the trap opened every time. And yet, despite three attempts to hang Lee, the trap failed to open every time.

As a result of these extraordinary circumstances, the execution was postponed. The Home Secretary, Sir William Harcourt, eventually commuted Lee's sentence to life imprisonment. Lee continued to petition for his release with successive Home Secretaries and after 22 years, he was finally freed in 1907.

The scaffold used in the execution was tested upon orders of the Home Office. When it was moved to the coach house from the old infirmary where it was housed, the scaffold was discovered to have a hidden defect. The draw bar was misaligned slightly, meaning that the trapdoor's hinges stuck and did not completely drop through.

Researchers looking into the murder of Emma Keyes have suggested that there is actually another possible suspect for the crime – one whose link to the victim was not known at the time. He was Reginald Gwynne Templer, a young solicitor whose family was prominent in the area.

Templer offered to represent Lee, which many people felt was irregular given that he was a friend of Keyes. Although Lee accepted his services, he was only the accused's lawyer for a short time since he fell ill and was unable to represent him properly. Eventually, Templer's disease progressed to the point that he had to be committed to an institution for the insane on November 18, 1886. He died two months afterwards.

Although Templer's link to the victim was not known at the time, it is believed by researchers that he was actually having an affair with the cook, Elizabeth Harris. Since such a liaison would have been extremely scandalous during the Victorian era, it was kept quiet, possibly with the help of Keyes, who may have been Templer's confidant. In addition, at the time of the murder, Harris was allegedly pregnant with Templer's child.

Templer's death was attributed to “paralysis of the insane” on his death certificate, a neuropsychiatric disorder that was believed to be the result of a syphilis infection. Before he died, he was reported to have been babbling, possibly about murder. Scholars studying the crime have suggested that he was possibly raving about Keyes' murder.

Of course, all this is circumstantial and there is actually no evidence that Templer was involved with the murder. The same could be said of the case against Lee.

In addition, Lee told the authorities that Templer was actually at The Glen on the night of the murder, but they reportedly ignored this claim. Officially, he was alone with Keyes that night. Templer's possible involvement was an angle that should at least have been looked into by the authorities, but it seems that they never considered any other suspects.

What Became of John Lee?

After John Lee was released from prison, he fell into obscurity. Scholars have since worked to recreate what became of Lee, and the resulting picture is not a flattering one. Following his release, Lee was seen as an ‘admired personality' who had been spared by divine intervention from being hanged for a crime of which he was innocent.

In 1909, he married a girl from Newton Abbot named Jessie, with whom he had two children. For a time, he also worked in a pub in Lambeth, London called Ye Olde King's Head, where he would regale customers with the story of how he escaped the executioner's noose.

While working at the pub, he met Adelina Gibbs, who was working there as a barmaid. She would become his mistress, and Lee would abandon his family. Jessie and her children would become destitute and ended up at Lambeth Workhouse in 1911.

It was initially believed by scholars that Lee ended his days in the southwest of England, in Tavistock at the Workhouse. A death certificate was discovered in the name of John Lee, who died of myocardial degeneration, along with an unmarked grave believed to be his.

Subsequent research has told a more interesting story. It now appears that Lee, along with Gibbs, illegally immigrated to the US where he lived in New York. He and Gibbs would have a daughter named Evelyn. This also happened to be the name that Jessie gave to the daughter she had after Lee abandoned her.

Records showed that Lee would eventually apply for citizenship after living in the US for the qualifying five-year period. However, he made his actual Declaration of Intention to become a citizen only in 1939, when he was already 75 years old.

In the US, Lee apparently did well for himself, as he remained employed throughout the depression years of the thirties. He worked for an automotive company as a shipping clerk. Lee was even able to own a house in Milwaukee valued at $2,300 by 1930.

In 1933, the Lee family was struck by tragedy when Evelyn, who was just nineteen at the time, was found dead. She had been employed as a maid at the apartment of Dr. and Mrs. Arthur Kovak. When her employers returned home late, they found Evelyn dead in the bathroom. After two post examinations, her death was determined to be the result of accidental inhaling of naphtha fumes, which she had been using to clean the drapes of the bathroom.

Following the tragedy, Lee did not follow up his Declaration by formally applying for citizenship after the minimum two-year waiting period. He died at Milwaukee on March 19, 1945.

In a final twist, it was later revealed that Adelina Lee, John Lee's widow, had actually been married to another man at the time she fled with him to America. Adelina had married William Edward Jones, a banker, in Staffordshire a year before the two of them left England.

Unfortunately, the fate of Lee's real wife, Jessie Augusta, remains unknown. Her last known whereabouts were the Lambeth workhouse where she ended up with her two young children, as well as being pregnant with Lee's child.

Read:
Who Was The Boogeyman Of New Orleans?
The First Serial Killer In The USA
The Famous 1971 Hijacking by D.B. Cooper
Crimes Against Children - The Search For Gregory Robert Whitehead
Gary Ridgway - The Green River Killer
The Real Dalton Brothers
The Santa Rosa Hitchhiker Murders
The Frankford Slasher Serial Killer
Finding Jimmy Hoffa
The Case of Adam Walsh - Dahmer or Toole


John Lee, The Man They Could Not Hang 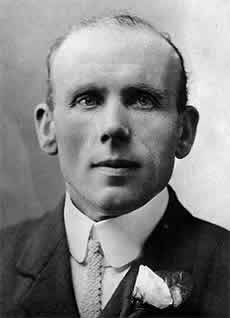