The Daring Hijack And Disappearance Of Dan Cooper

Dan Cooper or D.B. Cooper. Even after more than 45 years, many are still intrigued by the colorful case of the daring hijack and disappearance of Dan Cooper. Also known as D. B. Cooper, the hijacker of Northwest Orient Airlines Flight 305 jumped into notoriety and mystery on the night of November 24, 1971.

Dan Cooper - You Are Being (sic) Hijacked

During a flight from Portland to Seattle, the passenger later identified as Dan Cooper was said to have ordered a glass of bourbon and had a smoke. He then calmly passed a note to one of the flight attendants indicating a bomb in his briefcase.

The note read: "I have a bomb in my briefcase. I will use it if necessary. I want you to sit next to me. You are being (sic) hijacked".

After the hijacking was relayed to the ground, authorities scrambled to gather $200,000 in $20 bills as he requested.

He then released 36 passengers at Seattle-Tacoma International Airport in exchange for the ransom money and four parachutes, two front, and two back parachutes. He also asked for a fuel truck to refuel the Boeing 727 which was to be flown to Mexico.

D. B. Cooper Parachuted Out With The Ransom Money

The first clue to the suspect's identity would be his airline ticket. Dan Cooper was the name used by the hijacker to purchase his ticket. The more popular D. B. Cooper moniker was the result of miscommunication among the members of the press. He was described by witnesses as a sharply dressed man wearing a suit and a pair of sunglasses.

For years following the daring hijack and disappearance of Dan Cooper, more than a thousand suspects and leads were investigated.

A number of people came forward with claims that they were the mystery skyjacker but all were proven to be frauds with most trying to cash in on the case's popularity. Investigators failed to match DNA evidence from a JCPenney clip-on tie left by Cooper in the plane.

One suspect, Richard McCoy, was extensively investigated but was later cleared of the skyjacking. McCoy was a Vietnam War veteran who was a skilled parachutist. The BYU student taking up political science was caught after staging a similar skyjacking incident months after Cooper made headlines. He was cleared of the Flight 305 hijacking on account of him not fitting the descriptions given by the witnesses.

A portion of the ransom money amounting to $5,800 was retrieved after they were discovered in February 1980 by a boy who was playing along the Columbia River beach.

Sadly, the man who packed and could identify the parachutes used by Dan Cooper, which was a military-issued NB6 nylon chute with a conical canopy, recently passed away. Earl Cossey, 71 years of age, died in April of 2013 as a result of a blunt force trauma to the head during a home invasion.

Back in 2011, an Oregon woman stepped forward claiming she was related to the notorious hijacker.

Marla Cooper volunteered what she called a 40-year-old family secret naming her uncle Lynn Doyle Cooper is the same man as Dan Cooper. She claims that on the day after the hijacking, Uncle L.D. Cooper came to their home for Thanksgiving dinner with injuries that he said was the result of a vehicular accident. Marla was only 8 years old then when he last saw his uncle as he disappeared after that fateful night.

To prove her story, she presented a picture of her uncle which closely resembles the sketch of the suspect.

There were also reports that fingerprints on an old guitar strap which belonged to L.D. matched those found on the airliner, but was ultimately ruled as inconclusive. Also, she mentioned that L.D. was fascinated with a Canadian comic book character named Dan Cooper.

Dan or D. B. Cooper has become some sort of cult icon thanks to his daring hijack his exuded charm and the fact that he was flamboyant.

His action has even changed the flying industry. It led to improvements on a plane's design particularly concerning the aft doors and airstairs, and the installation of cockpit door peepholes.

This case also resulted in the Sky Marshal program and the required inspection of passengers and baggage. Even after the FBI considers the case closed, the story of the daring hijack and disappearance of Dan Cooper will forever live in the minds of many and be among the greatest mysteries of our time.

On the FBI Dan Cooper page, FBI in Seattle says: "Although the FBI will no longer actively investigate this case, should specific physical evidence emerge-related specifically to the parachutes or the money taken by the hijacker - individuals with those materials are asked to contact their local FBI field office."

Read:
Who Was The Boogeyman Of New Orleans?
The First Serial Killer In The USA
Crimes Against Children - The Search For Gregory Robert Whitehead
Gary Ridgway - The Green River Killer
The Real Dalton Brothers
The Santa Rosa Hitchhiker Murders
The Frankford Slasher Serial Killer
Finding Jimmy Hoffa
The Case of Adam Walsh - Dahmer or Toole 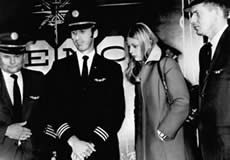 The pilots, along with some crew members 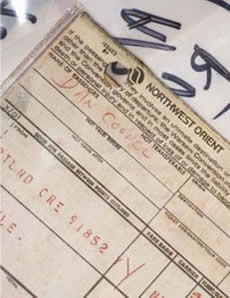